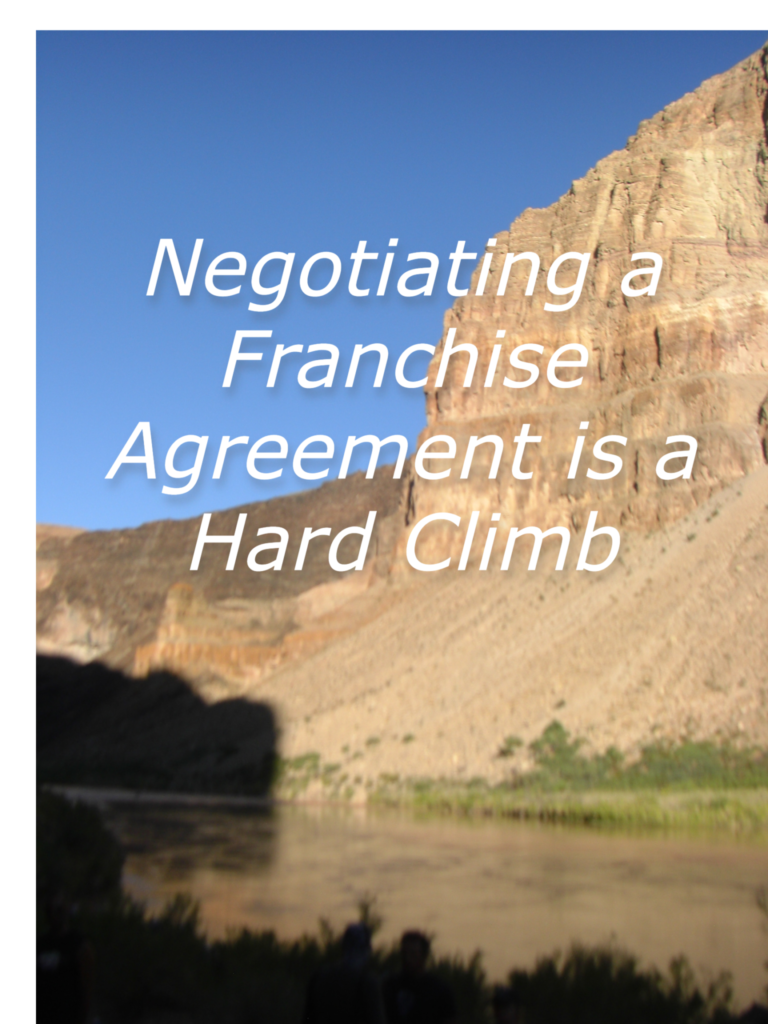 Changing a Franchise Agreement is Challenging at Best

Question: Do You Have Any Thoughts On Negotiating The Franchise Agreement?

Will a franchisor consider negotiating the franchise agreement? For instance, if my sales don’t reach “x” dollars in ‘y’ amount of time, can I get out of the agreement?  Bottom line, are there strategies if you aren’t making money or if the lease agreement is too onerous? Thanks in advance.

Yours is an interesting proposition, but unfortunately, not one that the vast majority of franchisors are going to entertain. Franchisors are adverse to making changes, unless, as is the case in most human activities, you have more to offer than they do. Let’s look at negotiating the franchise agreement from a couple of angles. (Better chances of negotiating at the end of this post.)

First, you’ll find that established franchisors are unwilling to change a word. It could leave them exposed to the entire network requesting such changes. Disclosure documents are expensive to develop and they will always favor the franchisor. Why wouldn’t they? You can review them, critique them, refer them to your attorney, accountant and other counselors, and yes, even request changes. But the bottom line action on your part will boil down to one basic move – accept or reject the opportunity.

No franchisor wants to loose a financially qualified prospect, so they will be interested in “discussing” any point you raise, but discussion is where the road will generally end.  That’s why they have sales departments.

Second, regarding specific changes to royalty terms, keep in mind that the franchisor has two main sources of income, franchise fees and royalties.  In an ideal world, franchise fees should cover the franchisor’s cost of putting you into business (cost of sales, training and set-up) and royalties should kick in as quickly as possible to pay for administration and profits.

Third, the lease agreement is generally between the franchisee and landlord. The franchisor wants nothing to do with that potential liability except in cases where the franchisee fails and the franchisor might desire an option (not a commitment, but an option) on taking over the location and phone number.

You should expect support from a good franchisor, but the success or failure of your individual unit is your responsibility. If you fail, you fail. Yes, the franchisor will have a failure on its books, but will be looking for the next sale.

Now, here are two (among other possible) things can change if or when you’re trying to negotiate the franchise agreement. One, if you’re working with a brand new franchisor trying to get the first few franchisees in the door. Perhaps a reduced franchise fee, a larger territory, or maybe additional units at lower rates can be agreed upon. But realize that you’re also taking more chances with a new franchisor. If they’re not established its just a greater risk if you can perform adequate due diligence regarding the performance of existing franchised units. And two, if you are buying an existing franchise business, there will be some possible change considerations. Your franchise attorney should be consulted.

A note of caution: If you happen to find a franchisor who’s been around for a long time and willing to bend the rules to gather up your franchise fee — you ought to be thinking hard about running the other way.

And last, if you feel particularly ambitious on this subject, you can begin to study the FTC’s position on disclosure.