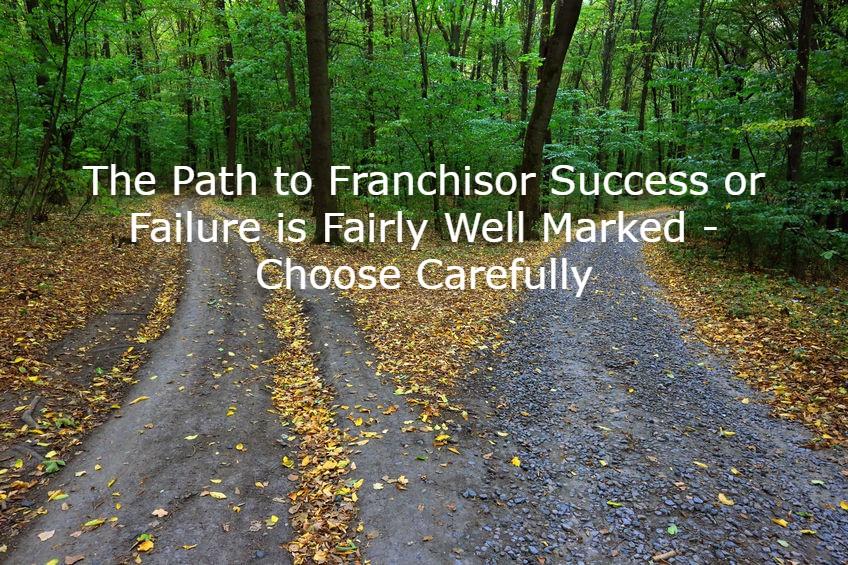 A Franchisor’s Success or Failure ….

….. is fully dependent upon the amount of expertise and foresight held by themselves and the help they choose to avoid the inevitable pitfalls. Those pitfalls usually spell the difference between franchisor success and franchisor failure. Although critical to negotiating three stages of franchising a business (feasibility, formation and management), franchise expertise and foresight are not mong the new franchisor’s skills, especially it the beginning.

1. Franchisor Success Or Failure Is Mostly Determined Early On

Successfully launching a new franchise demands objective analysis of the business concept relative to systems, marketplace and people. We refer to that analysis as a feasibility study and were the first to do so. Today the term is used loosely by other people as a screen for selling services. When that happens, the necessity for real feasibility is glossed over. Why? Because truthful findings impact two critical parties. Those parties are as follows.

Successful (and unsuccessful) entrepreneurs who embrace franchising as a growth vehicle fall in love with the idea. Who wouldn’t? Fortunes have been made using other people’s money and other people’s time to reproduce a single, sometimes very simple, concept that’s successful. Potential franchisors, once emotionally committed, are almost always going to move forward. In spite of facts, they often don’t want the dream disturbed or diminished.

Business owners once smitten by the franchise bug tend to downplay the negatives. The temptations of franchising are calling and they’re as powerful a force as any other. Mistakes are made in love. Franchisors most likely choose success or failure at this exact moment.

If you’re new to franchising, terminology can be confusing. So let’s clear up a major source of that confusion. The phrase ‘franchise consultant’ used to mean a person who was hired, for a fee, to help with the development of a franchise brand or work on improving one already established. Today however, hundreds of franchise brokers and salespeople have adopted that title. Perhaps it sounds better than calling what it is, the honorable business of sales. But the bottom line is that those who advertise as ‘free franchise consultants’ are not in the business of helping prospective franchisors. They’re in the business of introducing franchise buyers to concepts they represent. They earn a commission or referral fee if the prospect buys a franchise.

Now you’ve found the right category, consultants in the business of helping new and active franchisors. But there’s more to clarity and discern among the options.

Franchise consultants, like all consultants, earn a living by consulting. No surprise there. The problem here however, is that the very much in love prospective franchisor, described above, is waiting to be further romanced. It’s a near perfect match because the consultant doesn’t want to lose a potential fee. Together these two parties can gloss over fact finding in order to realize their mutual goal of franchising the business.

5. Staying Cool: The First Test For Franchisor Success Or Failure

Franchise feasibility is critical. It defines the honesty, integrity and legitimacy of the project, the entrepreneur, and the consultant. If the elements required to franchise a business are not present, the entrepreneur should not franchise. Of course, the franchise consultant, if incompetent, won’t properly evaluate the situation. Worse yet, if corrupt, the consultant may see a problem but not disclose it.

It’s tragic and immoral when a consultant inflates the ego of a prospective franchisor by telling them they’ll be successful when they simply don’t know that or know it and don’t say it. Incompetence, dishonesty and failure are rampant in franchising. Scores of failed franchisors and franchisees are grim testimony to this truth. Do your homework and forget about having your ego stroked.

The FTC may regulate franchising, but there is no licensing for franchise consultants.

Well designed growth plans, training, support programs and knowing how to select quality franchisees only result from properly shaping the franchise from the beginning. Those are huge tasks, but with proper guidance from knowledgeable mentors, successful business owners will meet the challenge. And it all starts at the beginning of the journey.

Choose franchise consultants focused on you as well as your project.

Call or write with any questions. We’ll  be glad to meet you.